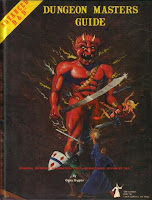 Hasbro owned Wizards of the Coast (WotC) has announced the development of the 5th editions game. After a mere 4 years that the halfling gem called 4th edition came out. WotC as announced that they will be "conducting ongoing open playtests with the gaming community to gather feedback". Forbe's wrtiter, David Ewalt, was invited to a playtest of the fledgling system and had this to say:

"[...]the fifth edition rules show promise. They’re simple without being stupid, and efficient without being shallow. Combat was quick and satisfying; we got through most of an adventure in just a few hours. And I get the sense that fifth edition will bring back some of the good complexity of previous versions, allowing players to create unique characters and new worlds.
Most of all, it feels like D&D, not a console video game, or an MMO, or a card game. That’s the first step towards bringing old players home."

Considering the short cycle of 4th edition, I wonder how many will wait it out to see if the new edition can stand the test of time. With so many games out there these days and the plethora of avenues for people to produce new games, I perceive this to be a difficult battle for the RPG titan. Where does this put all us nay-sayers that disliked 4th edition. Hopeful that Dungeons & Dragons can return to that that idyllic place where we were heroes once.
Further Reading
Posted by Vinsane at 1:46 PM 0 comments This past weekend I had the pleasure/displeasure of watch the AMC miniseries 'The Prisoner'. It looked like a good movie and started Ian McKellen, or as I like call him 'Gandalf, and Jim Caviezel. After watching the movie, I was left in a wierd state and torn between loving the film and hating it. I pondered how to pull something like that off in a game.
***************
*Spoiler Alert*
***************
This movie has lots of twists and depends on the character's http://www.imdb.com/title/tt1043714/PoV to keep the watcher guessing, read furter may ruin the movie for you.
So the basis of the movie is that the main character, named 'six' played by Caviezel, comes to a place in the desert known as 'the village'. All people have numbers and everyone accepts the way things are, and that the village is the only known place in the world. Six, on the otherhand, has flashes of his other life in New York and fights against the overseer of the village 'two', played by McKellen.
The climax comes when six comes to realize that the village is not another place, but a shared subconcious of the group who live in the village. Things are happening in the real world in tandem to what is happening in the village.
I found this to be an interesting concept and along the lines of the Void and the Word books by Terry Brooks, where the main character flashes between the present day and the future when he sleeps in the other world. It stated that when he sleeps, he sees the world as it would be if he fails in his mission. I always got the distinct feeling he was actually in both worlds.
So, I was thinking, how would character's handled a game where their characters were constantly switching between realities, trying to figure out, which one was real. I may experiment with this idea for my game along side with a setting that is similar to Shadowrun. The character's may well think it is the matrix, but come to find it is something fare mor sinister.

Email ThisBlogThis!Share to TwitterShare to FacebookShare to Pinterest
Labels: Adventures 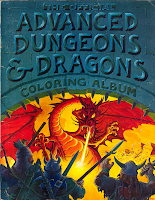 I found this on Aeron Alfrey's blog, Monser Brains. I really didn't recall this book until I got to the picture of Tiamat. I recalled that page, and the page with the griffin.
My boys saw what I was doing and asked that I print them a page. My youngest chose Tiamat and his brother chose the bulette. I told them that I would post their handiwork when they are done.
Aeron stated that he would pull them down if the copyright holder asked, so you may want to get them while you can. There is also a link to a pdf book of the images.

With new year on the horizon, I would like to take the time wish everyone a prosperous new year. the question for today is:

How do you celebrate the new year?

Aside from the traditional 'New Year's Resolutions' we decided to try out some other New Year traditions from other cultures.
In many Latin American countries, it is traditional to wear yellow on New Years. I'm not talking about wear an article of clothing containing the designated color like we do on St. Patrick's Day. No, this is an all out down to the underwear sunburst yellow. The article of clothing I own that is yellow is a pair of swim trunks, and my wife owns naught of this color. She jokingly made a comment about my swim trunks and I disappeared into the bedroom. Unbeknownst to her, I went to visit my mother today, and she gave me a bright yellow polo shirt. I came out of the room and she actually shielded her eyes from my brilliance. She then asked if I was gonna offer her a Jimmy Dean Breakfast Sandwich
We have also decided to try out the Mexican tradition of writing down the things that you no longer want in your life and then burning the list. This is to help symbolize your willingness to release the negative energies that bind us from being prosperous. We are also going to recognize Japanese tradition of writing down your first actions of the year, this being my first blog post. This is suppose to help you slow down and recognize the little things in life, take stock, and appreciate what you have.
I have never really experienced the turning of the year in any of my games, but I imagine, if done right, it can be a very memorable experience. One could run a fantasy adventure where the heroes attempt to stop an evil wizard from blanketing the world in darkness. The group vanquishes the wizard, but must wait until dawn to see if they stopped him in time (and maybe they didn't). Another adventure may be a Shadowrun where the party has regain a dossier only to have their target, disappear into the throng of party goers on New Year's Eve. The group must resort less obvious tactics due to the heightened police state. The possibilities are endless with the amount of information you can draw on New Year practices.
In case you are interested here is a wiki article on different traditions celebrated around the worlds.
Further Reading
May the best day you had in the closing year, mirror your worst day in the year to come.
Posted by Vinsane at 1:39 AM 0 comments