he gods are mean and spiteful entities that show little compassion for the hard work of others. As game masters, we put much into our games and give very little credit to those inspirations. We are the gods of our worlds. The weaver of tales for the amusement of other gods, we transmute the work of others to weave a tapestry to our liking.

Well, that may be a little much, and many of us like to give credit where credit is due, but, in the heat of the story, we often fail to cite the sources of inspiration. This is not a fault; breaking the storyline to explain the history of your story/creature/etc would detract from the game. And remembering to credit everything that happened after 8+ hours of gaming is excessive. Still, I often like to explain my reasonings after the game to those interested.

While sitting about on this lazy Saturday afternoon I came upon the 1985 movie 'The Adventures of Hercules'. Watching the scene where Hercules fights Aracne, the Spider Queen, I thought of Lolth, the Demon Queen of Spiders, and made me think if the two were related in any way. The original story of Arachne was a human weaver so skilled she challenged Athena herself. Although she did not loose the challange, her pride was her downfall and Arachne killed herself when Athena destroyed her work. Athena took pity on Arachne and turned her into a spider.

In this version, and the version in 'Hercules: The Legendary Journeys', Aracne/Arachne is the queen of spiders (pictured her 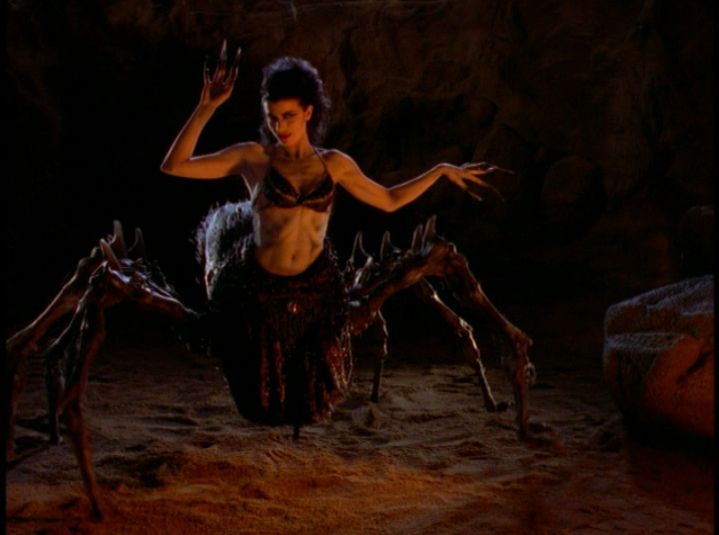 e). This can hardly be considered the source for Lolth since the adventure 'Descent into the Depths of the Earth' came out in 1978. Even still, Dungeons and Dragons is rooted in mythology and greek is not the only one around. Africans have a trickster that is a spider by the name of Anansi, the aztecs have Teotihuacan, the spider woman, and Peru has a spider god in its mythology (I tried to find the name, but it eluded me).

My final question would be, if the two would fight who would win? I would have to say that Arachne would be an elder god, around since the times of the Greeks, but her powers are weak and her followers are few, if any. The upstart Lolth is new, not even a hundred years old, but her following is vastly greater due to gamers around the world. This fuels her power and presents her as a threat to Arachne. If it were put into my world, Lolth would be defeated in a climatic battle with Arachne, who used her guile and wisdom to defeat the young upstart and take back her rightful place among the gods and renewing her followers from the ranks of the drow, but that's just me.
Posted by Vinsane at 3:54 PM