As I was out and about yesterday, I purchased the Runner's Toolkit for Shadowrun. This fulfills my quarterly support for the local gaming shop. Although I paid 50% more than purchasing it on-line, the thrill of buying something on a spur of the moment could not be denied. Normally, I would not of have bought something like this as most of the items are just re-hashed material from the other books. Here is a list of what comes in the Runner's Toolkit:
It was this last book that caught my attention. I have always been agitated on how the powers that be chose to break-up the equipment list. In SR4, not only did you have the annoying task of looking up multiple books, but you had to flip through the book to find a stat you forgot, say the AP rating of your pistol. I think that this booklet here makes the set worth it. But I also got a cool Shadowrun sticker to put on my netbook. This was the icing on the cake. 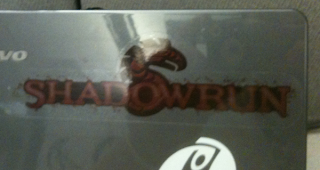