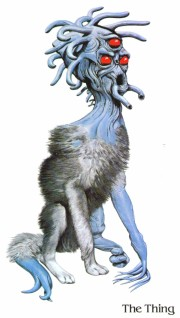 I rarely go out and watch movies on opening week-end, but one of my all time favorite movies is "John Carpenter's The Thing". When I heard that they were making a prequel to the movie, I was very excited. I was ecstatic that Marc Abraham and Eric Newman chose to do a prequel instead of a remake because the original movie was too good of a classic to ruin.
I went with a like minded friend who felt the same way about the original and was surprised to find similar opinions of the movie. While the movie was not as 'scary' as the original, I found many of the scenes very tense and, even though some of the surprises were cliche, they still startled me. Of our opinion, we found that many of the scenes were copied from the original movie, from the creature's initial escape, to the the burning of one of the camp members that was slowly being absorbed after a big fight. While it still works for the movie, it was a little disappointing to those who have seen the original. We agreed that that the movie falling to 'the blood test' would have ruined any originality the story might had brought to the table, but we were pleasantly surprised when they presented a different way to determine who may have been the alien. One thing that struck me as odd, was a particular scene when the lead character confronted the alien in human guise, knowing full well it was an alien before turning the torch on it. I do not know why, knowing it was the alien, she would not have tried to talk to an obviously advanced species. That is of course, other than the fact that it may ruin the plot of the second movie.
I would like to say the special effects were exceptional, and I will admit that that the special effects were coequality for what I have seen in the movies these days. But, the original movie's effects entranced me to the point of believability. The original movie was done so well in my opinion, that watching it nigh thirty years later has not lessened the movie the way others that have not withstood the test of time. One of my particular favorite parts of the new movie was the arm-centipedes. Where the arms came of one of the 'infected', sprouted legs, and attacked the Norwegian carrying the man. Here is a shot of him fighting it off.

One of the things that really impressed me was the care taken to make portions of the new movie fit into the original scenes of the original movie. I found that this movie answered any burning questions about the Norwegian camp those many years ago. This was a quote from Heisserer, the movies writer:
I found the movie quite enjoyable and would recommend any Sci-fi/Horror fan to go see it. I think the creator's attention to detail and respect for the original, outweigh any misgivings to fans of the original. The 'only' thing left to ask, is the rare cut scene of the sled dog running away from the human camp at the end of the first movie. This scene was only on some of the released for TV versions of the movie and I have found that I am one of the few people I know that have seen it. This leads to an interesting 'Will they do a Sequel?' question.
Further information:
Note: The pic of the thing is from Barlowe's Guide to Extraterrestrials as discribed in the original Novella, of which you will not see in either movie.
Posted by Vinsane at 6:36 PM