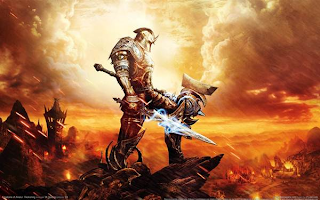 I have recently completed 38 Studios' premier fantasy console RPG 'Kingdoms of Amalur: Reckoning™' and I am quite disappointed in the turn of events that has befallen 38 Studios. To qualify this review, I should state that I do not normally buy my games new. This was an exception as I had been waiting for it since I heard about it on Obsidian Portal's interview with R.A. Salvatore. So my wife picked it up for me the first Friday after the game released and I played it quite extensively, much to my wife's chagrin.

The main thing that drew me to the game was R.A. Salvatore writing for the game. Salvatore has been one of my favorite authors since the Icewind Dale Trilogy and world of Amalur did not disappoint. They were multiple storyline interwoven with the main character's story line that it was difficult to keep everything straight. Amalur is probably one of the richest and compelling worlds that I have found in  a while. The only down side was that you could only be a human or elf (called the dokkalfar and ljosafar). The use of Norse terminology was also very well done in the game. Gnomes are very prevalent in game, but are not a playable race.

The scenery in the game was amazing and I contribute this to Todd McFarlane the art director. Many said that McFarlane had been too removed from artwork to be very innovative, but the sweeping landscapes from forests to swamps to deserts and even the alien looking landscape if the Tuatha (winter Fae) are all awe inspiring. My favorite being Webwood, a forest inhabited by giant spiders. Seeing horse carts suspended twenty feet in the air by webs while the sun shone through the trees' canopies another hundred feet up was extremely satisfying.

The final name I would drop is Ken Rolston; he was the lead designer for Morrowind and Oblivion. This also and mixed result to a lot of people, but I feel it added to the grandness of the game. I truly feel as if the I started in a remote section of the world and slowly made my way into the epic fight between the mortal races and the immortal fae. The world is not as open as skyrim or fallout, meaning you can't just pick a direction and walk till you hit the end of the map. The areas are funneled in to each other. I found that annoying at first, but the areas themselves are well thought out and I may have missed it all together if they didn't display it on the mini-map.

The disappointment at the end of the game was in the finality of the game. While you are still allowed to continue and complete any side quests you may have missed; the game just feels over. If you have been following 38 Studios, they were planning on putting out an MMO based in Amalur. If you look at the world map, the game Reckoning was set in a little sliver of the world of Amalur.

Alas, it does not seem so and 38 Studios may close their doors for good. If you would like to read about what has happened there is a good article called '38 Studios' Downfall' at Gamasutra. So not only is the game finished, but future projects as well.

IGN gave the game a 9 while Game Informer rate the game in the '7's because it did not bring anything new to the industry. I have to side with IGN, Reckoning was just the tip of an Iceberg and I think that if I run a fantasy game again, I will base it in the world of Amalur.
Posted by Vinsane at 12:35 AM

Email ThisBlogThis!Share to TwitterShare to FacebookShare to Pinterest
Labels: review